I like listening to music while I code. My favorite music subscription thingy lately is [Google Play Music](music.google.com). It has a great selection and its radio feature doesn’t seem to be as affected by Pandora’s Law, which is:

The natural phenomenon that occurs whenever a generated radio station plays for more than an hour, leading to strange, unlikable songs and an inevitable ‘WTF is this?’ moment on the part of the listener.

The other day I was working on an awesome prototype with d3 and was totally in the zone (if you don’t know what the zone is, it’s ok. Muggles are welcome here too). Suddenly I found myself listening to some Selena Gomez song (no offense, she’s perfect in every way) that made me want to hurt a puppy. So I searched frantically through what seemed like a hundred open tabs in Chrome, finally finding the right one and hitting option - to end my misery with a thumbs down. The zone was gone. Selena threw off my groove. So, naturally, I spent the rest of the afternoon figuring out how to make global keyboard shortcuts for Google Music. I’m really glad I did. Music should boost your productivity, not detract from it. Now a thumbs down, thumbs up, next song, play/pause etc. is just a keystroke away, whether I’m focused in Chrome or not. Here’s what I have so far, feel free to try it out and give feedback.

Step One
Install Fluid. It’s a simple app that lets you create a “desktop” app out of any URL. Once installed, enter “Google Music” for the name, https://play.google.com/music/listen for the URL, and give it a better icon by saving and selecting this image. Doing this will give you a dedicated app for Google Music, which is convenient and also makes scripting easier. 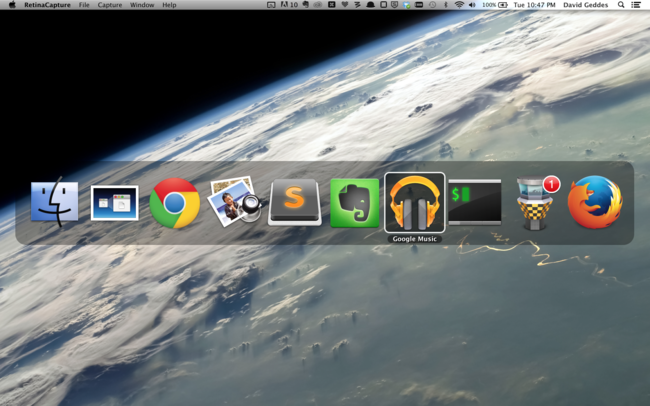 Step Two
From here you can use AppleScript to do whatever you want. I find it’s easiest to just emulate the hotkey for Google Music’s built in shortcuts. For example to switch to your Google Music “app”, hit play/pause, and hide the app, the script is simply this:

This quickly focuses the music app, makes it play or pause, and hides it again in the background.

Step Three
Wire up the running of your applescript with a keyboard shortcut. For this you can use either Alfred workflows or Keyboard Maestro or whatever you like. I use ctrl option cmd + [key] for my shortcuts. So to skip forward a song it’s ctrl option cmd + right arrow.

Step Four
Make one of these scripts for every shortcut you want to run, the only difference being the keystrokes you emulate. If I wasn’t lazy I’d probably put the common code into a function and pass it the keystroke parameter.

There you have it. Global keyboard shortcuts for Google Music or any other web app.

UPDATE: I realized that Google Music will un-thumbs-up a song if it already has a thumbs up. That’s no good, I want to be able to thumbs up a song without first checking to see if I’ve already given it a thumbs up. So I use Keyboard Maestro to check for the existence of the grey thumbs up button, and conditionally execute the keystroke. Works like a charm. Here’s a screenshot of my macro: 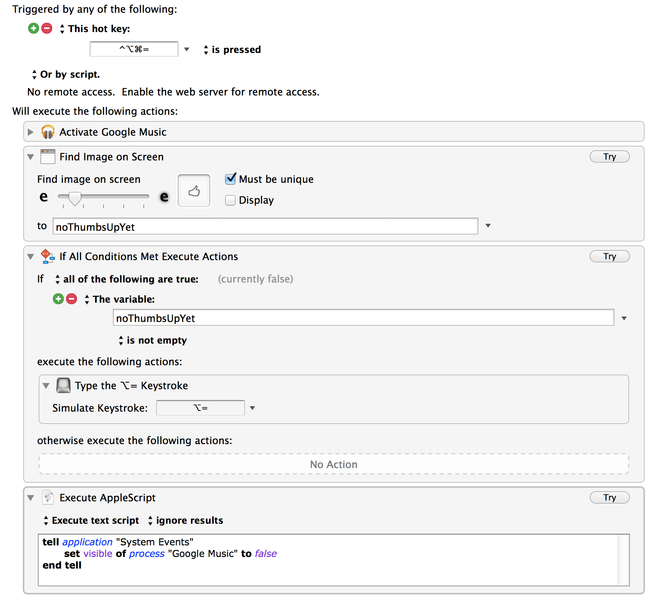 This is a quick note on the virtues of traceability. I’m not talking about tying git commits to business objectives, I have little interest in that. I’m talking about knowing what in the world is going on in your project. A while ago I... Continue →